If you are a parent/carer who would like to offer to help us with serving refreshments etc at any of our events, please email artsnetwork@cotham.bristol.sch.uk.

Click here to open Wisepay where you will be able to purchase tickets for upcoming shows and events.

Past shows and events 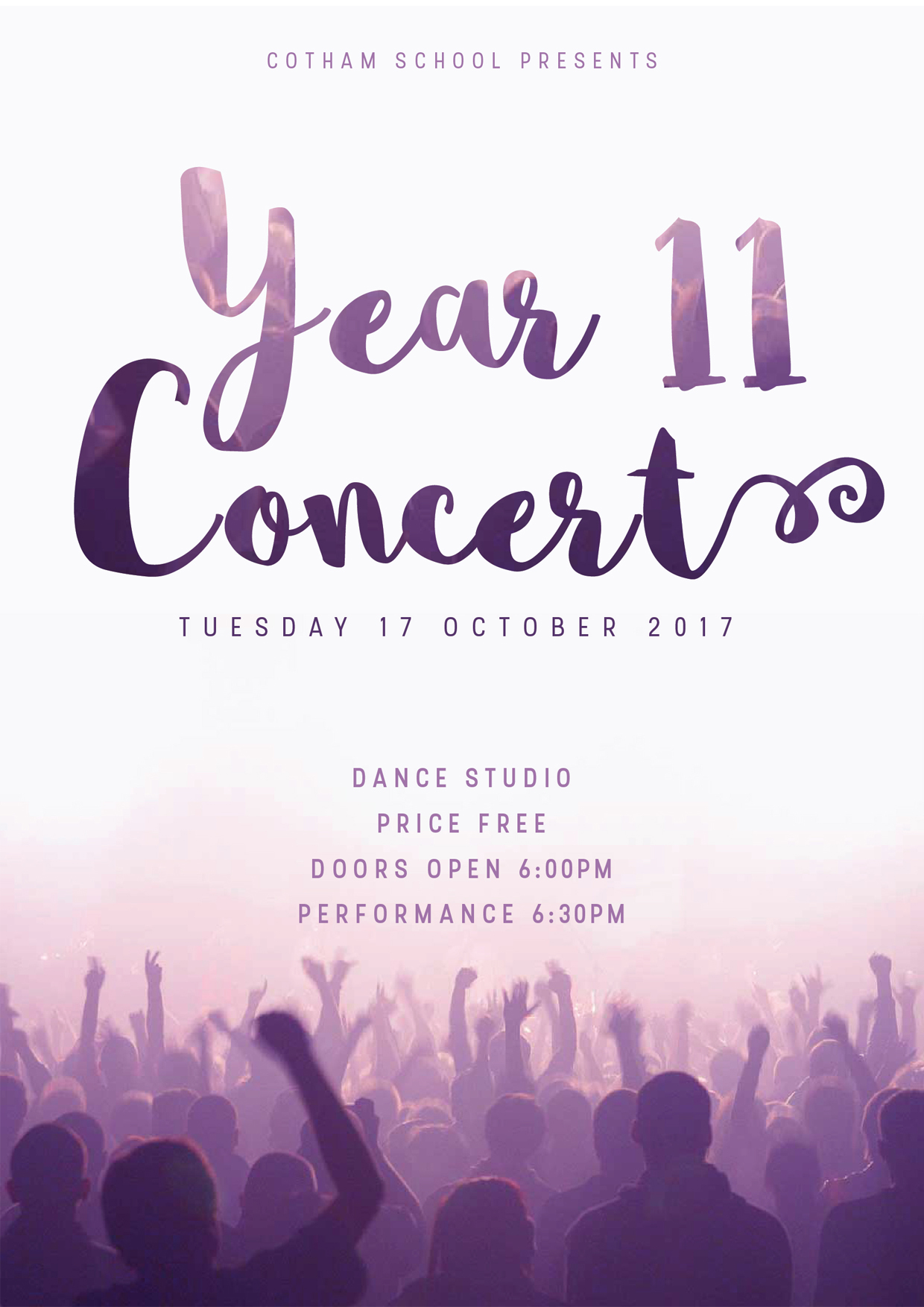 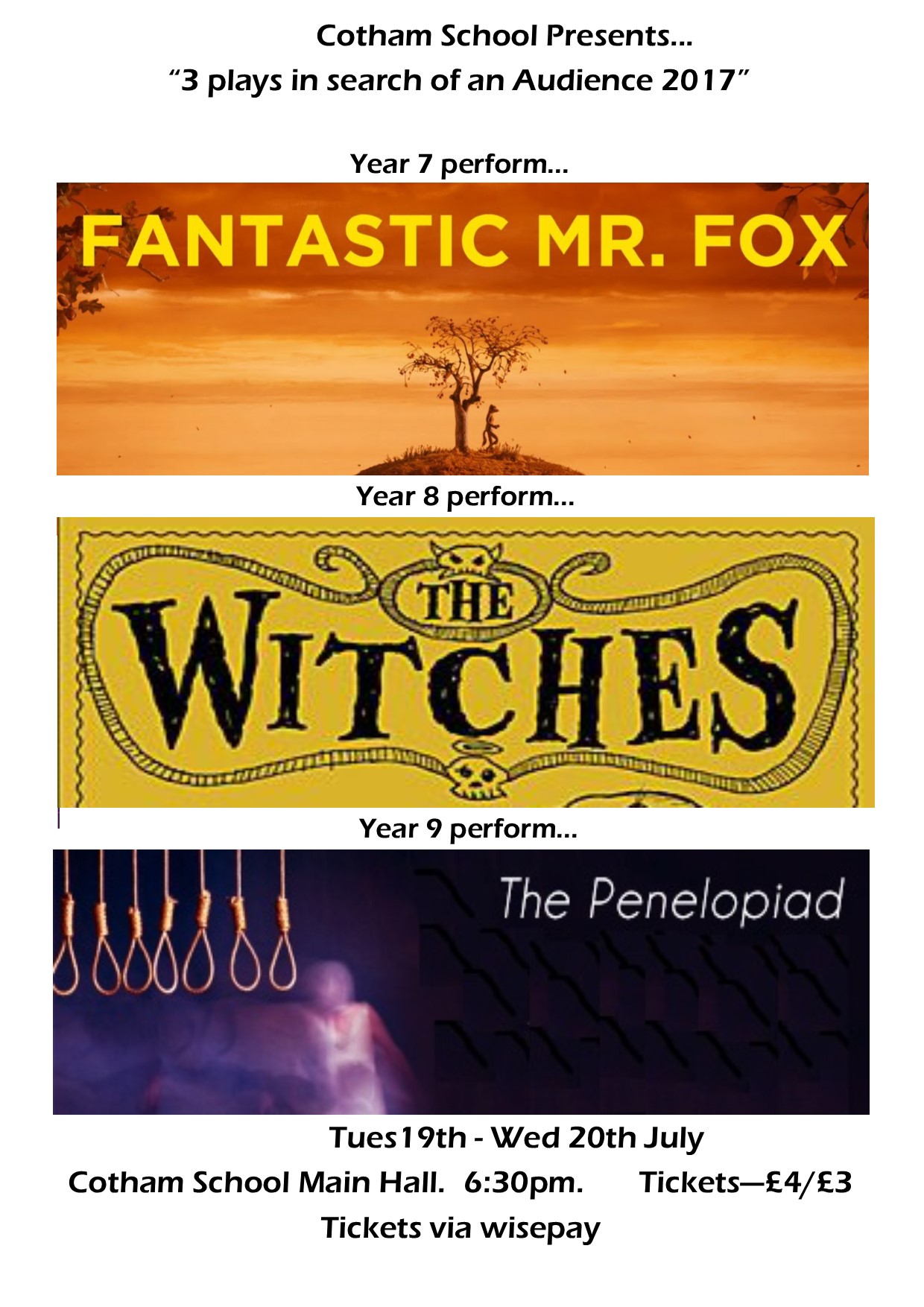 This year's "3 plays..." is rapidly approaching us. For those uninitiated with the format, "3 plays" is the name given to our Summer Lower School shows where 3 thirty minute plays are performed by Year 7, 8 and 9.

This year, Year 7 are performing an adaptation of Roald Dahl's "Fantastic Me Fox". The story revolves around an anthropomorphic, tricky Mr Fox who lives underground beside a tree with his wife and four children. In order to feed his family, he makes nightly visits to farms owned by three wicked and dim-witted farmers and snatches the livestock available on each man's farm. Tired of being outsmarted by Mr Fox, the evil farmers devise a plan to ambush him as he leaves his burrow, but they succeed only in shooting off his tail.

Not that this is a Roald Dahl retrospective, but Year 8 are performing an interpretation of the children's classic "The Witches". While staying at a hotel in England with his grandmother, young Luke inadvertently spies on a convention of witches. The Grand High Witch reveals a plan to turn all children into mice through a magical formula. When they find that Luke has overheard, the witches test the formula on him. Now, with the help of Helga and the hotel manager, Luke the mouse must fight back against the witches.

Year 9 are breaking away from this accidentally established theme and are performing a version of Margaret Atwood's "The Penelopiad". The play tells the story of the Odyssey from the point of view of, Odysseus' wife, Penelope. Penelope reminisces over life in Hades, her marriage to Odysseus, Helen of Troy, and her relationships with her parents. A Greek chorus of the twelve maids, whom Odysseus believed were disloyal and whom Telemachus hanged, interrupt Penelope's narrative to express their view on events.

Performances take place on Tuesday 18 July and Wednesday 19 July in the Main School Hall starting at 6:30. Tickets are priced at £4/£3 and are available via Wisepay. 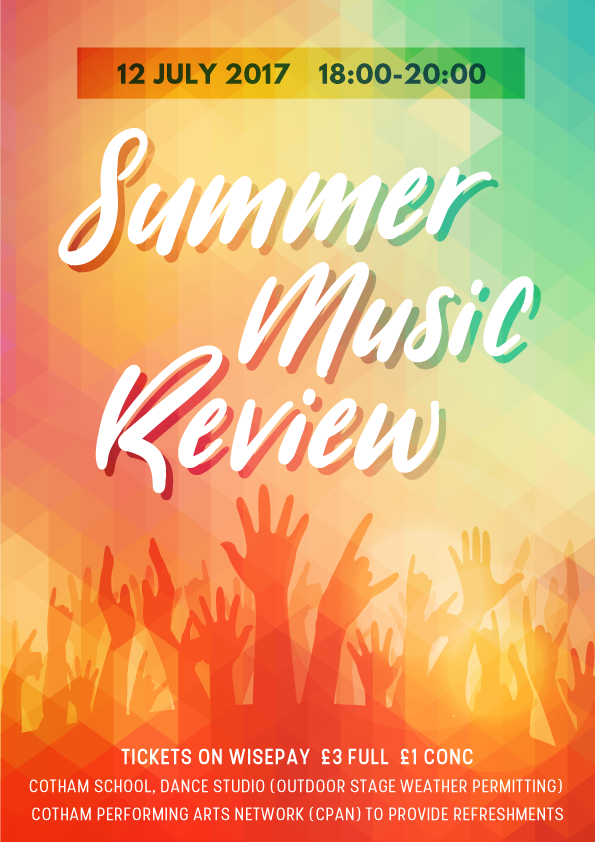 You are invited to this year’s summer celebration of all things musical at Cotham School. The 2017 Summer Music Review will take place on Wednesday 12 July 6pm - 8pm.

As the memory of Macbeth fades, time moves towards the next exciting offering from the Performing Arts Department. The Spring Concert takes place on Thursday 30 March in the Main Hall.   A veritable smorgasbord of musical styles will be on offer from orchestral through Modern Pop and Jazz to Steel Pans. So please come and support our hardworking and creative students. Refreshments will be available. Doors are open at 6.30pm and the performance begins at 7pm.  Tickets are available now on WisePay at £4 for Adults and £2 for concessions. Macbeth is our whole school show this year. In Macbeth, we see how power, love, betrayal and blood play their parts. We look at Macbeth’s life after the war. It shows the audience how the choice to obtain power can change everything and how a single thought from a person can choose your fate. Power is everything in this play. It shows how power cannot only make you go mad but it also makes you fear the loss of your power. In addition, this play conveys how power can drive relationships further and further apart.  Because of the stress and corruption of their minds caused by the constant need for more power. We see how even the closest of people can be found to we swung into opposite directions. Adding to this we see the constant struggle of bravery, whether or not to do something and forgetting about the right and wrong. To draw this out, we have decided to set our production in a world reminiscent of the mid 1980’s and the height of the miners’ strikes. The play will be performed in a thrust stage to enhance the intimate relationship between Macbeth and the audience. 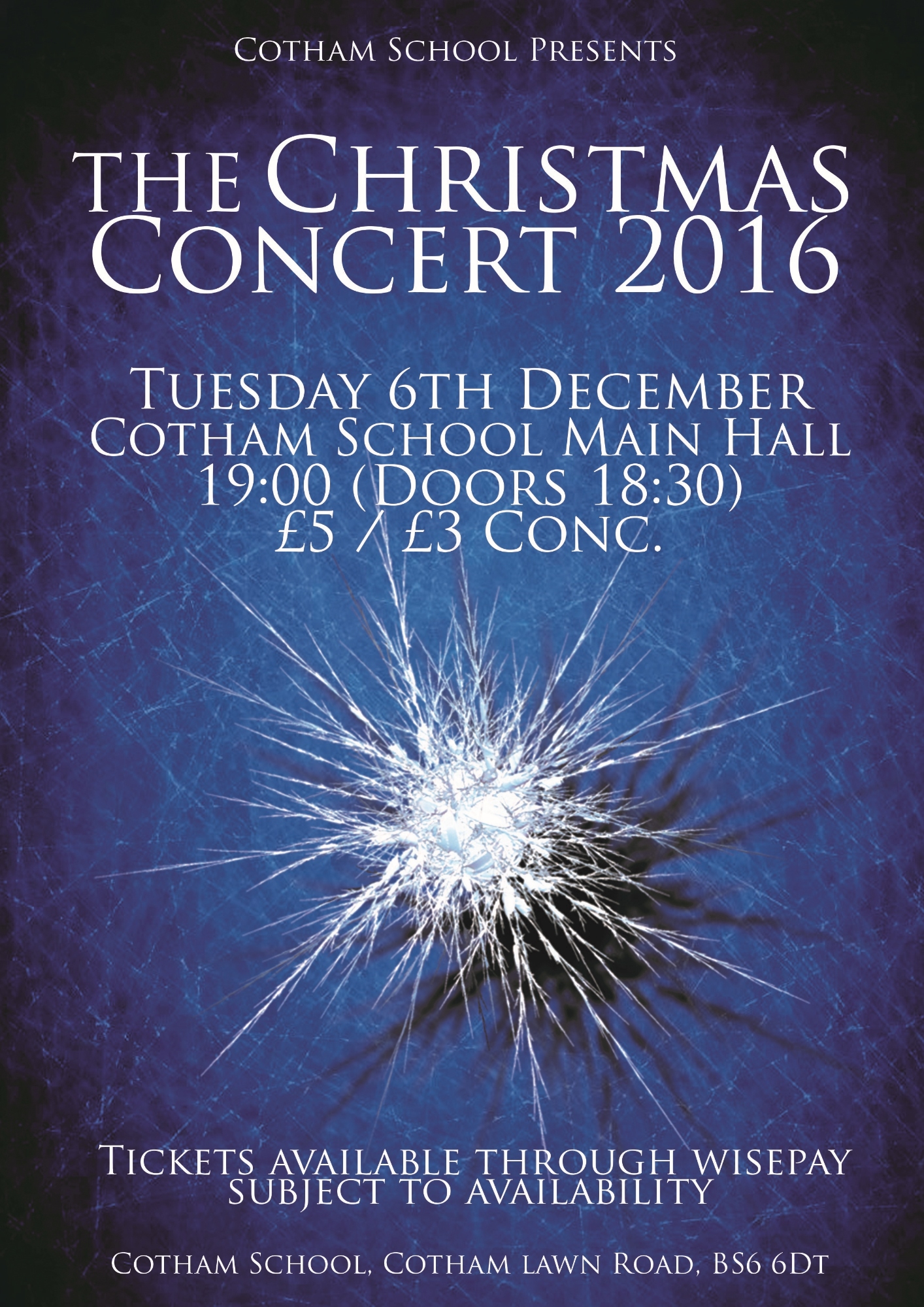 The festive season is almost upon us!  This year musicians from across the school will be performing in the Main School Hall for the first half of the concert programme and, in a break from tradition, the second half of the programme will be held in the Hub, where the Cotham Performing Arts Network (CPAN) will be serving food and drink and you will be entertained by further music performances from students. 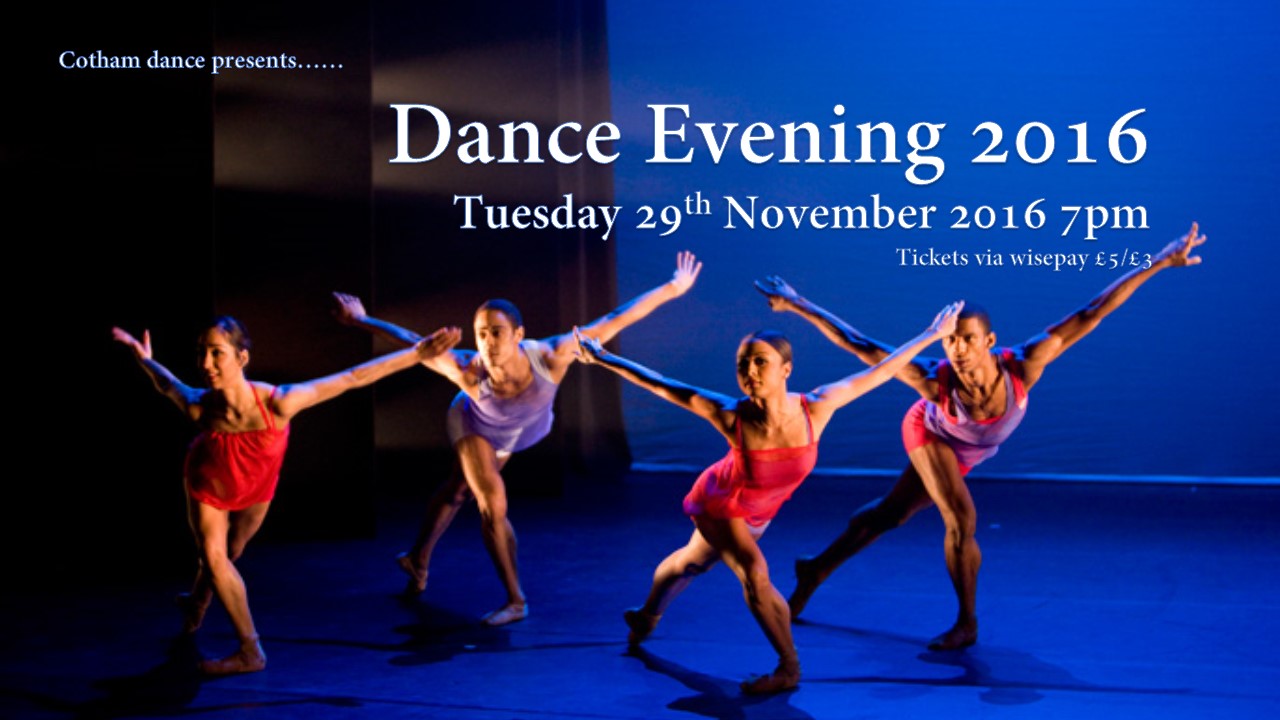 Dance Evening celebrates the success of Dance in the school. Performances from all age ranges, including exam classes that demonstrate the variety, skill and joy that can be found in Dance. 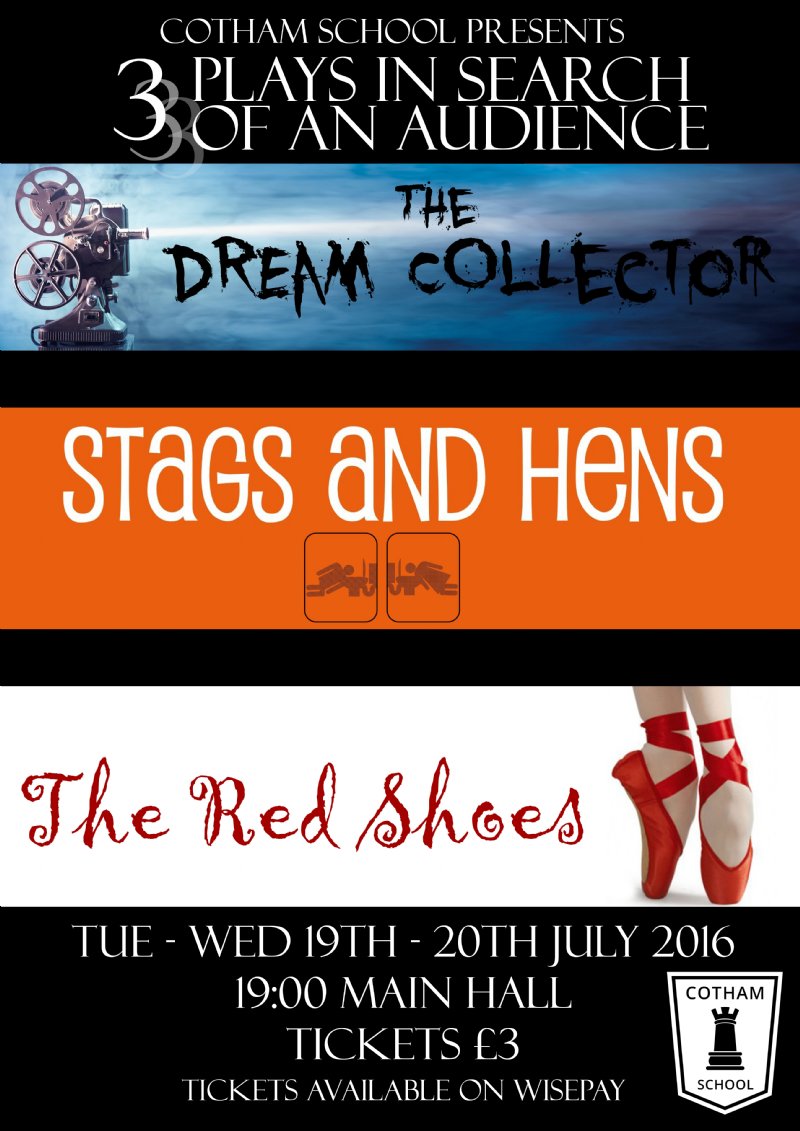 Tickets are on sale now. Please log into you wisepay account to purchase your tickets. You will then receive email confirmation of your purchase which will serve as an E-ticket, so please print this off and bring it with you on the night. Tickets are £3 each. 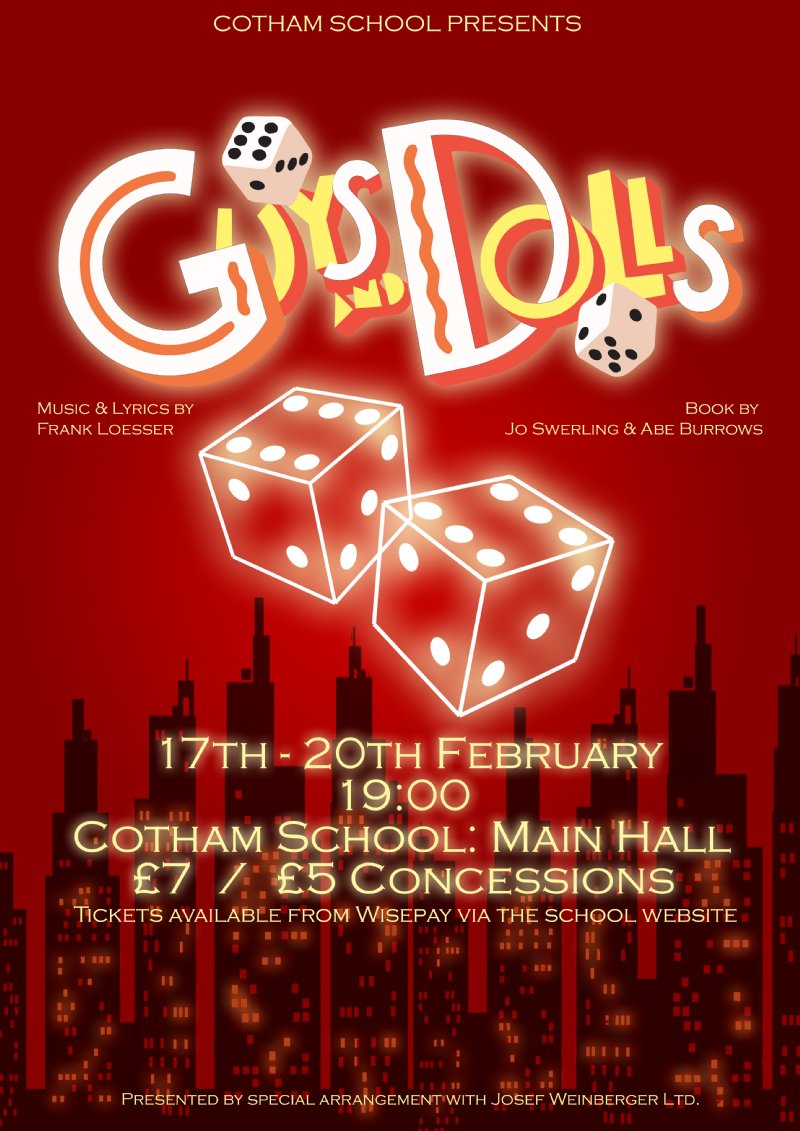 This year the school musical is Guys & Dolls. There are four performances from Wednesday the 17 of February to Saturday the 20. Ticket prices are £7 for adults and £5 concessions. Make sure you don't miss out. Go to WisePay and get your tickets before somebody else does! 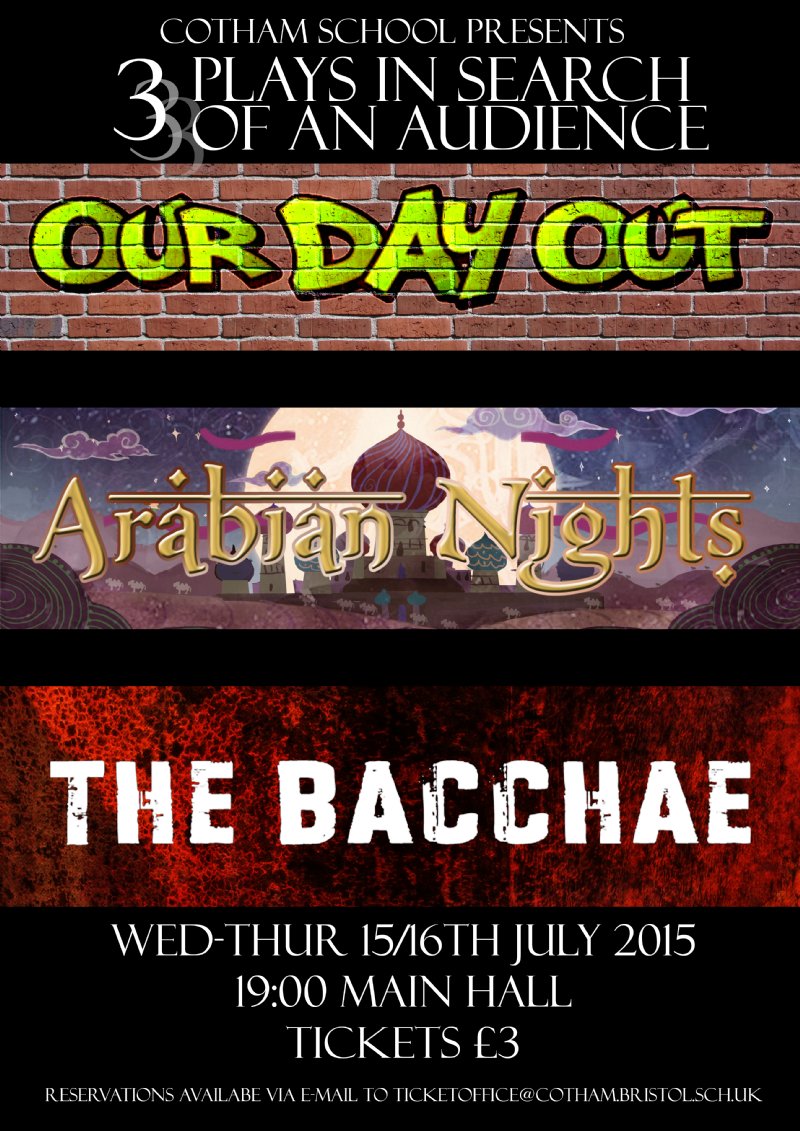 Tickets are on sale now. Please log into you Wisepay account to purchase your tickets. You will then receive email confirmation of your purchase which will serve as an E-ticket, so please print this off and bring it with you on the night. Tickets are £3 each

Bring it to the Stage 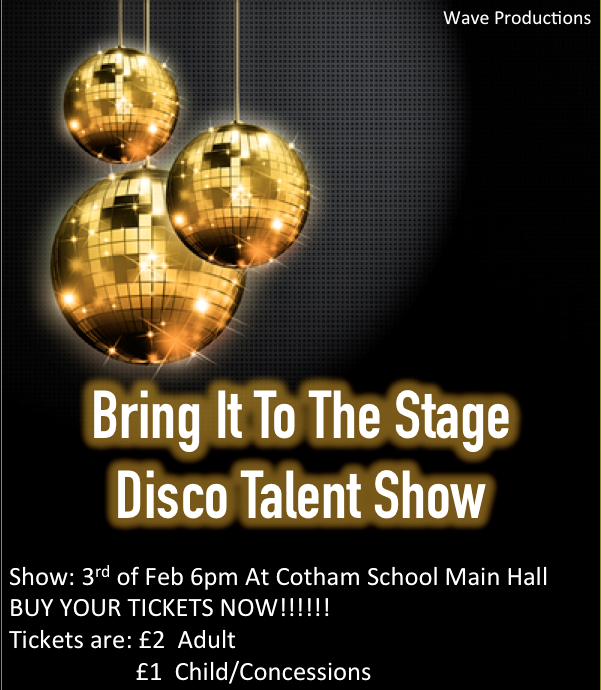 The school has introduced a new intuitive and easy to use online ticket booking system, as used to book parents evening and family consultation day appointments.  Please visit https://cothamschool.parentseveningsystem.co.uk to reserve your tickets now.  You will receive an automated email confirming your reservation.  Please then allow 24 hours for your reservation to be added to your Wisepay account for payment.  We are confident this will be an improvement to the previous system and welcome any feedback.  Please purchase your tickets in advance as availability on the door will be limited.  If you have any questions please do not hesitate to contact us by email to ticketoffice@cotham.bristol.sch.uk

This exciting evening with a Disco theme has been organised by our Post 16 Performing Arts students as part of their assessment.  Students from Yr7/8/9 will be showing us their hidden talents in what promises to be a great fun evening for all the family!  do come along and support the students

Come and see our work this Wednesday 19th March - see FLYER FOR DETAILS.  Our performance piece is 'The Bellybutton of the World'.   We are also performing at Bristol Old Vic on 22nd March 4.30pm but tickets for that show are very limited. 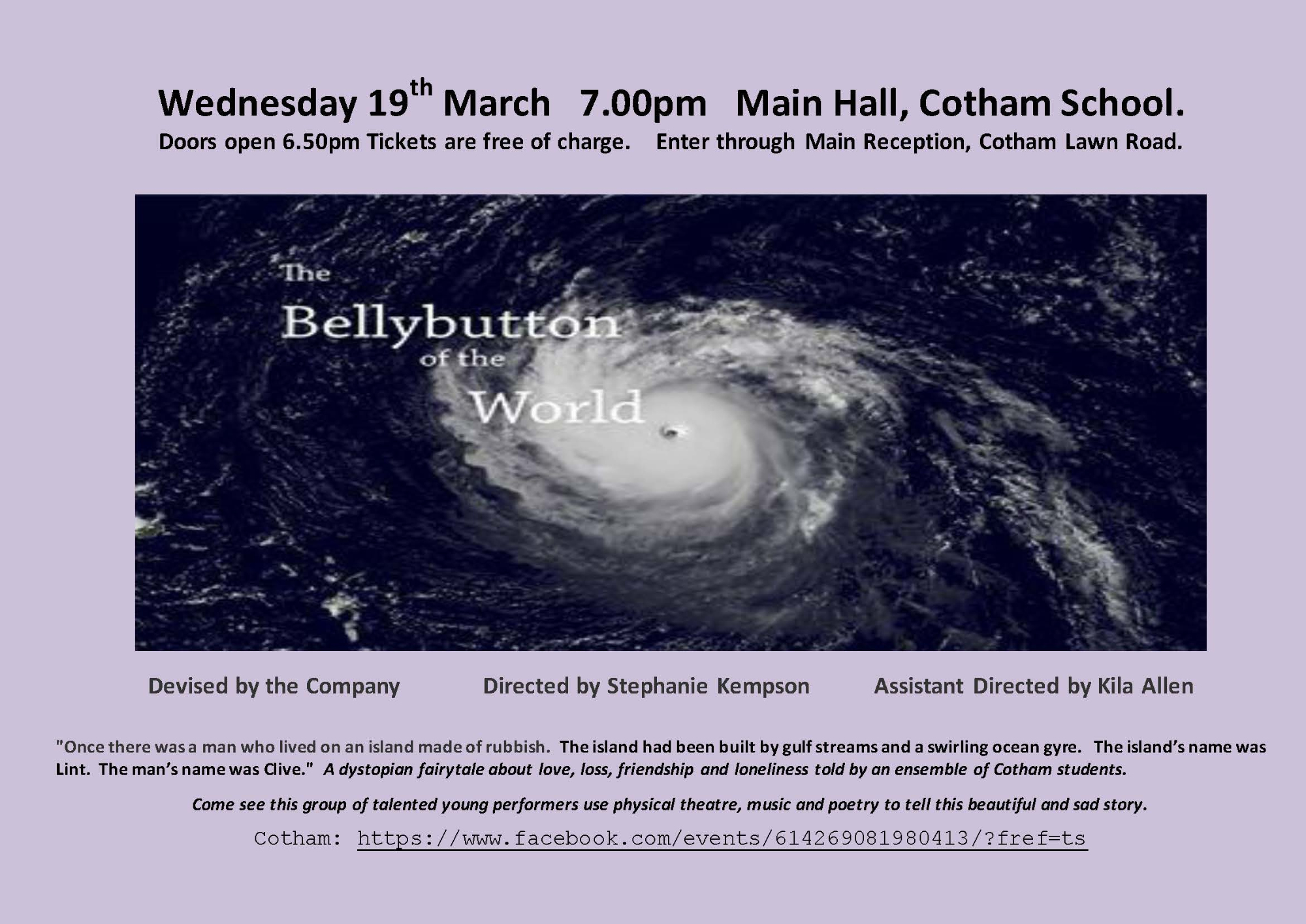 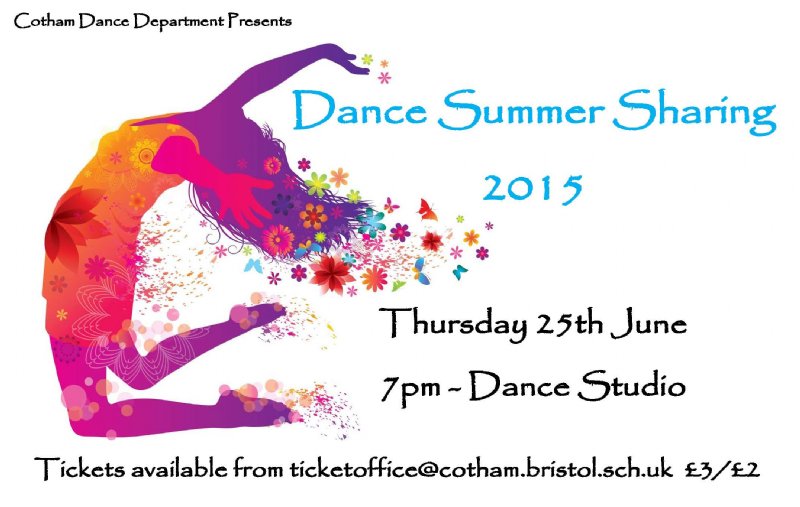 We have had to make the decision to downscale the scheduled summer sharing due to staff illness. We know that many students and parents have been working hard to have something to perform and so we are continuing with the evening, however, it will now be shorter, smaller and free. It will now start at 5 and will be an hour or so in duration. Please can performers arrive at 4:30pm in full costume.

I know that this is disappointing but we felt it better to go ahead with a lower key evening rather than cancel the evening all together. 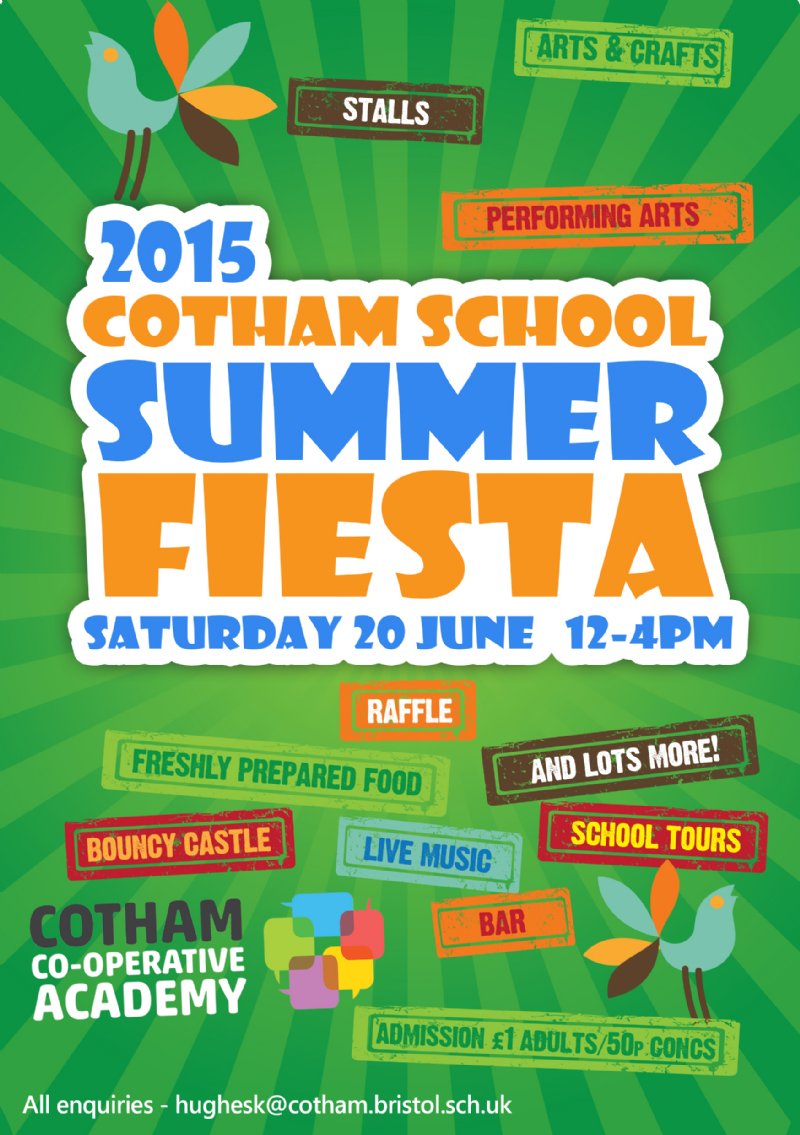 This years Cotham School Fiesta will take place on Saturday 20th June from 12pm - 4pm. With Arts & Crafts, Raffle, Stalls, Performing Arts, Live Music, Bouncy Castle and Bar, there really is something for all the family! 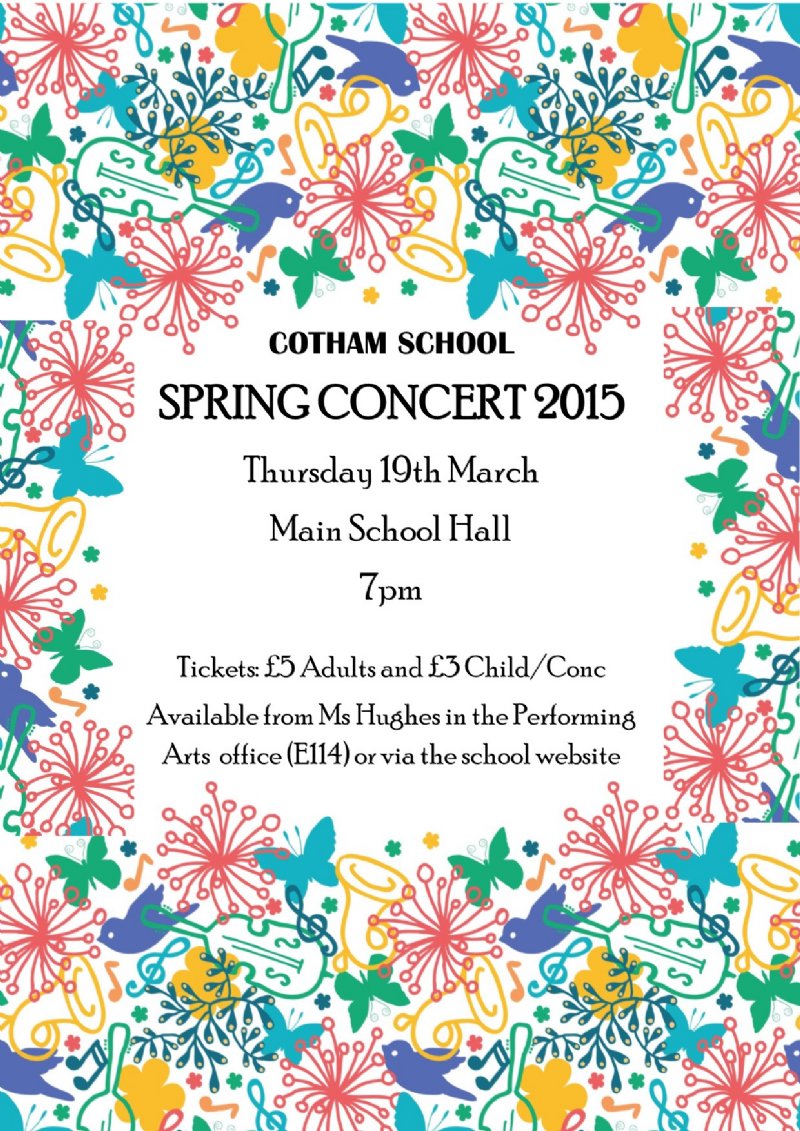 The Music Department are delighted to invite you to this years’ Spring Concert to showcase the work of students both in and outside of the classroom.  The evening will also include some of the large groups that regularly rehearse each week, some smaller ensembles as well as individual and group work that has come out of lessons.

The concert will begin at 7pm until approximately 9pm.  Refreshments will be served in the interval by CPAN (parental support network for the Performing Arts).

Tickets are on sale now from Ms Hughes in the Performing Arts office priced £5 and £3 for concessions.  Tickets can also be reserved using the schools online ticket booking system, as used to book parents evening and family consultation day appointments.  Please visit https://cothamschool.parentseveningsystem.co.uk to reserve your tickets now.  You will receive an automated email confirming your reservation.  Please then allow 24 hours for your reservation to be added to your Wisepay account for payment.  Please note: the payment facility will only show up on your account if your tickets have been reserved in advance.  Please purchase your tickets in advance as availability on the door will be limited.  If you have any questions please do not hesitate to contact us by email to ticketoffice@cotham.bristol.sch.uk. This concert will be the last at Cotham for a number of Yr 11 and Yr 13 students.  I would like to take this opportunity to thank them for all they have contributed to the musical life of Cotham and wish them well in their future.

We look forward to seeing you at the concert,

The Resistible Rise of Arturo Ui 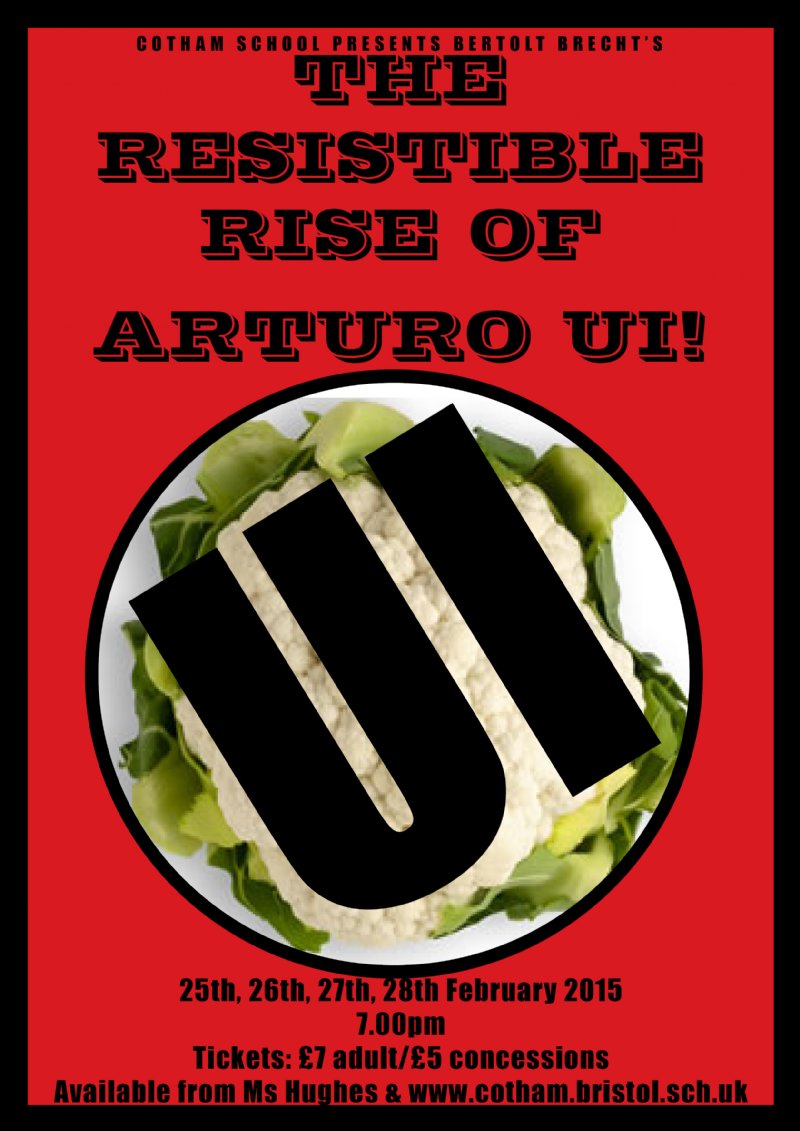 We are delighted to invite you to come and see this year’s school production:

- The Resistible Rise of Arturo Ui -

This Brecht play centres on the rise of Hitler. It is a dramatic retelling of historical events and Brecht’s reaction to them. Brecht sets the action in the world of a small-time American gangster “Arturo Ui”, his hoodlums and their attempt to gain control of the “Cauliflower Industry”. The play is a comedy and yet this is used as a tool to heighten the monstrosities that are carried out. It is highly dramatic, highly theatrical and highly political.

Tickets for the event cost £7(Adult), £5(concessions).  The box office for this event has now closed but there are tickets available for Fri/Sat that may be purchased on the door.  Doors will open at 6:30pm for a prompt 7pm start. It is anticipated that the performance will last approximately 2.5 hours including an interval during which the Performing Arts Network Group will provide refreshments

Thank you for supporting the performing arts at Cotham School