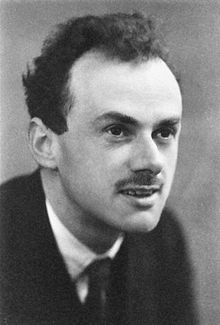 Paul Adrien Maurice Dirac was born on 8th August, 1902, at Bristol, England, his father being Swiss and his mother English. He was educated at the Merchant Venturer's Secondary School (later Cotham School), Bristol, then went on to Bristol University. Here, he studied electrical engineering, obtaining the B.Sc. (Engineering) degree in 1921. He then studied mathematics for two years at Bristol University, later going on to St. John's College, Cambridge, as a research student in mathematics. He received his Ph.D. degree in 1926. The following year he became a Fellow of St.John's College and, in 1932, Lucasian Professor of Mathematics at Cambridge.

Dirac's work has been concerned with the mathematical and theoretical aspects of quantum mechanics. He began work on the new quantum mechanics as soon as it was introduced by Heisenberg in 1925 - independently producing a mathematical equivalent which consisted essentially of a noncommutative algebra for calculating atomic properties - and wrote a series of papers on the subject, published mainly in the Proceedings of the Royal Society, leading up to his relativistic theory of the electron (1928) and the theory of holes (1930). This latter theory required the existence of a positive particle having the same mass and charge as the known (negative) electron. This, the positron was discovered experimentally at a later date (1932) by C. D. Anderson, while its existence was likewise proved by Blackett and Occhialini (1933 ) in the phenomena of "pair production" and "annihilation".

The importance of Dirac's work lies essentially in his famous wave equation, which introduced special relativity into Schrödinger's equation. Taking into account the fact that, mathematically speaking, relativity theory and quantum theory are not only distinct from each other, but also oppose each other, Dirac's work could be considered a fruitful reconciliation between the two theories.

Dirac's publications include the books Quantum Theory of the Electron (1928) and The Principles of Quantum Mechanics (1930; 3rd ed. 1947).

He was elected a Fellow of the Royal Society in 1930, being awarded the Society's Royal Medal and the Copley Medal. He was elected a member of the Pontifical Academy of Sciences in 1961.

Dirac has travelled extensively and studied at various foreign universities, including Copenhagen, Göttingen, Leyden, Wisconsin, Michigan, and Princeton (in 1934, as Visiting Professor). In 1929,after having spent five months in America, he went round the world, visiting Japan together with Heisenberg, and then returned across Siberia.

In 1937 he married Margit Wigner, of Budapest.