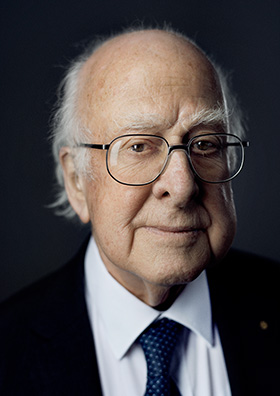 Peter Ware Higgs CH FRS FRSE (born 29 May 1929) is a British theoretical physicist, emeritus professor at the University of Edinburgh, and Nobel Prize laureate for his work on the mass of subatomic particles.

In the 1960s, he proposed that broken symmetry in electroweak theory could explain the origin of mass of elementary particles in general and of the W and Z bosons in particular. This so-called Higgs mechanism, which was proposed by several physicists besides Higgs at about the same time, predicts the existence of a new particle, the Higgs boson, the detection of which became one of the great goals of physics. CERN announced on 4 July 2012 that they had experimentally established the existence of a Higgs-like boson, but further work would be needed to analyse its properties and see whether it had the properties expected from the Standard Model Higgs boson. On 14 March 2013, the newly discovered particle was tentatively confirmed to be + parity and zero spin, two fundamental criteria of a Higgs boson, making it the first known fundamental scalar particle to be discovered in nature. The Higgs mechanism is generally accepted as an important ingredient in the Standard Model of particle physics, without which certain particles would have no mass.

Higgs has been honoured with a number of awards in recognition of his work, including the 1981 Hughes Medal from the Royal Society; the 1984 Rutherford Medal from the Institute of Physics; the 1997 Dirac Medal and Prize for outstanding contributions to theoretical physics from the Institute of Physics; the 1997 High Energy and Particle Physics Prize by the European Physical Society; the 2004 Wolf Prize in Physics; the 2009 Oskar Klein Memorial Lecture medal from the Royal Swedish Academy of Sciences; the 2010 American Physical Society J. J. Sakurai Prize for Theoretical Particle Physics; and a unique Higgs Medal from the Royal Society of Edinburgh in 2012. The discovery of the Higgs boson prompted fellow physicist Stephen Hawking to note that he thought that Higgs should receive the Nobel Prize in Physics for his work, which he finally did, shared with François Englert in 2013. Higgs was appointed to the Order of the Companions of Honour in the 2013 New Year Honours and in 2015 the Royal Society awarded him the Copley Medal, the world's oldest scientific prize.

He attended Cotham Grammar School in Bristol from 1941–46, where he was inspired by the work of one of the school's alumni, Paul Dirac, a founder of the field of quantum mechanics.